If your UR5U-8780L-twc remote is not working and you want to program it by universal remote to enjoy its features, below is the information for helping you program Time Warner or Spectrum Universal remote UR5U-8780L-TWC. If you cannot search the remote control code for a component or device, try to use the below remote code search method and follow each step sequentially. For different devices, the three digit remote codes are also given; you have to choose a particular remote code for controlling the remote control. 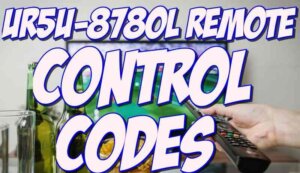 The Auto-search method would scan through all the remote codes to identify the correct code. For programming the  ur5u-8780l-twc by Auto search method, implement the below steps:

You could set up the remote by putting the code associated with your device’s brand. Make use of the below tools for searching your device and looking for relevant setup remote codes. For programming the spectrum remote ur5u-8780l by manual method, implement the below steps:

These remote codes are designed to operate the CISCO / SA, Pace Micro, Pioneer, Motorola, Samsung digital set-tops, and VCR, TV, AUX, and DVD equipment. You have to follow each instruction for programming the UR5U-8780L-twc Universal Remote by choosing an appropriate method and remote codes. If still, you have any confusion, then take the help from the manual.